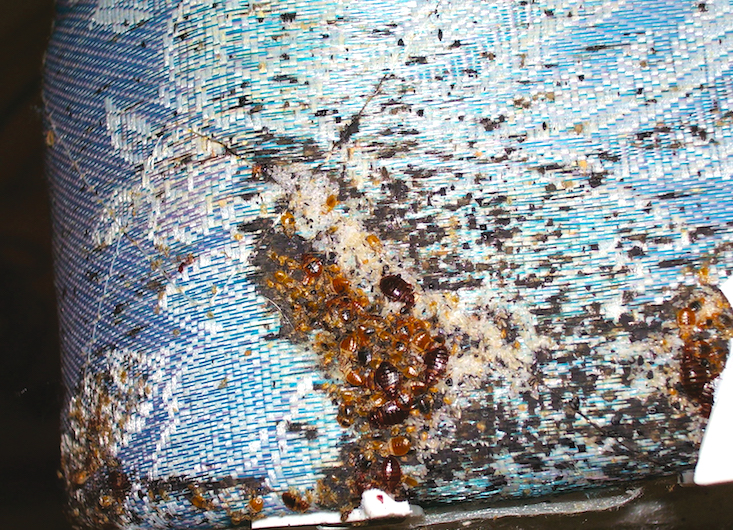 Many times during the post production process, still frames are edited and manipulated in Photoshop to enhance a scene. As our readers know, Photoshop is a well known image editing and creation software and not often associated with post production in film. One of our members was on a shoot for a project that took place in a run down hotel that looked similar to the Bates Motel. The production crew was able to stage most of the set to get the look and feel of the scene they were looking for. Some things were not in the budget to have live on set and had to be created using CGI and photoshopped frames. According to film producer Richard Ryan, the scene they were trying to capture was right out of a horror movie and took place in a run down motel room infested with roaches, bed bugs, and rats. Even though the motel had been abandoned for years, they had maintained the property to convert it into a tourists attraction. They didn’t have any animal handlers on staff to provide and manage any critters on set, so they turned to CGI and photoshop in post production to finish the scenes. The roaches and rats were done with CGI software and imported into the scene using Adobe Premier. Because of their size and rather immobile presence in the scene, the bed bugs were added in on a frame by frame basis using photoshop. Apparently the scene they created was so creepy that the viewers squirmed at the site of the bed bug infestation. The part in the movie had the main actor searching the room for a bag of stolen money that was hidden there. When the actor lifted up the mattress to reveal the money hidden under it he was encountered by a infestation of bed bugs swarming the stolen money. At that point he had to make the decision to either leave the money or reach into the swarm of bed bugs and retrieve the stolen cash. As any good criminal would do, the actor reaches for the money and immediately becomes covered in blood sucking bed bugs. After hearing screams inside from his partner in crime, his Jerry Curled partner rushes in to find his friend crawling with bed bugs. He runs back out to the car to retrieve a can of hair spray and a lighter, only to return and perform some bed bug infestation removal of his own. After raising the can and lighting his zippo lighter, the crazed partner turns the entire motel room into a blazing inferno, burning the cash, the bed bugs, and his criminal partner. The movie has had some laughable reviews, and should be considered a B movie at most upon it’s release. The point of this article was not to showcase the movie itself, but rather the idea that Photoshop can be used in film when editing single frames in post production. Our guess is that eventually Adobe Premier will adopt that technology and that editing process will take place right inside of the video editing application. If you do end catching the movie at a B-Movie Theatre, be carful that you aren’t attacked by bed bugs like this woman was in a Movie Theatre in Glendale, Arizona!!

Posted in: My Blog

Contango is an elegant, simple and clean design, emphasis on content. This theme is powered with custom menu, custom background, custom header, sidebar widget, featured image, theme options, nice typography and built-in pagination features. Contango Theme is suitable for any business or personal website. The Theme can work for various different niches. Contango is translation-ready and so much more.